Showing posts from December, 2011
Show all

He who has the most Christmas decorations wins! 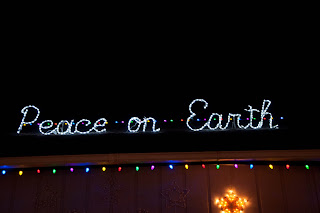 I have no idea what he and/or she wins but I am sure it is something. At one time, not very long ago, I thought my beautiful Aunt Ann (Hi Aunt Ann!!) had this prize in the bag. Then there was the house in Gloucester that I thought had the prize in the bag, turns out I was wrong there too. Come to find out the guy who has the prize in the bag has been working on getting his Christmas lights up since (drum roll please) August 4th. A.U.G.U.S.T.4.TH!!!! He told me the other night that he did not finish the last thing until December 10th but he lit them anyway on Thanksgiving night as is his tradition. I would have loved to have followed in CBW's foot steps and interviewed the guy but as it was there was people milling all about and he was rather busy. I did get a chance to say hello and let him know that his display was one of the most amazing things I had ever seen. Even as am adult I felt like a child there, not knowing which direction to look first, being amazed at every turn, a
4 comments
Read more 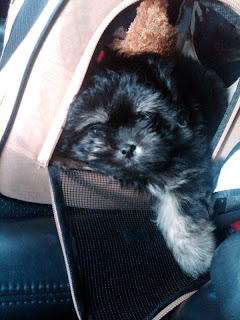 I mean really who doesn't like puppy pics! This is how the little guy likes to ride. And this little guy is way too cute for words. He loves the Hallmark dancing Snowman from a bazillion years ago it seems. I may go get him the new one. We are all making out well and are very happy. We like naps lots of naps... and snuggling with foxes.
1 comment
Read more 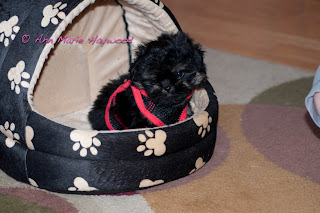 King Mugley Outer Banx Haywood.... we shall call him Banx from here on out cause really does a 2 lb dog need a name that out weighs him?? Mallory and I trying to figure out if he has an underbite. The little guy is napping in my lap as I type this and seems to be adjusting well to his new home. I on the other hand will need some adjusting to the midnight and 2 am potty calls but after the 2 am break he settles in for the rest of the night and doesn't seem to mind sleeping in until 7ish. I am sure there will be lots of pictures of the little guy as he grows up and plenty of stories but for now I will leave you with this... when he runs he sounds like a squeaky toy! Please wait for me!!! Shew.. caught you now pick me up! What?? Yes I know I am cute!
2 comments
Read more
More posts