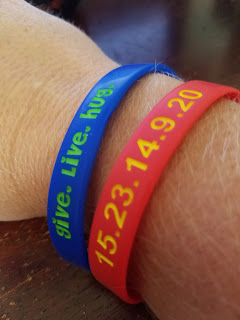 Hi there. It's been awhile. It really hasn't but it has.

The other day this blog popped up in my memories on Facebook. A link to a happier time, a glimpse into my life when my world was not so broken and shattered. I realized I needed to read my own thoughts on the days, weeks and months leading up to Deanna's accident. There is a wealth of knowledge from a girl who was struggling to gain her footing in a world of athletic friends with the newly acquired ocean breezes flowing through her windows. A girl who had an eating plan down and managed to drop 40lbs with very little pain. A girl who had a lot of life and fight in her.

Then it happened ... it all shattered into a million pieces in the blink of an eye.

Two weeks ago we had a bootcamp graduation, it marked another year of back to back to back bootcamps. The thing that no one knew was that was a feat I had not conquered since March 2012 to April 2013.  I kept going camp after camp that year, through boo boos, rotting feet, fall downs, and numerous other hurdles I kept going. Then as with everything else in my life it broke.  I hit a camp here and there, hit or miss, never consistent or even caring, until my bff started as a coach for Outer Banks Triple Threat and I had to be there for day one. I wanted him to know that he had my support as he had supported me through all the nastiness, and I just kept coming back. Through the love of some very good people in my life I was able to attend classes until I could completely move back to the beach. I missed a couple of weeks in the middle of last summer but it was very soon remedied and I kept up my workouts at home during that time, now here I am a year later and I have hit every camp through all the boo boos and hurdles. I am pretty proud of that.So why am I bringing up all of this today? Because today for the first time in that year I almost turned around and went back to my car.

During graduation two weeks ago, Chris asked us all if we had our red bands. I did, but I had taken it off and had Deanna's Give Live Hug bracelet on. He talked about what it meant to him and how looking down at it gave him a determination and strength to carry on when he just didn't want to. As it happens I put that band back on yesterday. This morning I get there and dang it I am tired and my foot hurts, the last two days I had pushed pretty hard in the gym and at bootcamp so I knew what was wrong, then out came the rope and before my poor feets had time to wake up and figure out that we were going to have to run.. we were running. No... THEY were running. I wasn't running I was walking and let the team and the rope go on in front of me, then they turned and came back. That is where the shame comes in having your team mates have to return for you, but then something worse happened.... they kept going. There was no mention of hey we are going forward, you turn here, or meet us there. Nothing just a run by and keep going. It was worse than a tap and leave! I realized at that moment there was absolutely zero way I would ever catch up but I kept on trudging along and I see someone break off from the group. Still not a wave or a point or a shout, so I kept on trudging and watched as my team continued forward and then ran out of sight.

In that moment I thought to myself screw this, I am going to have coffee and snuggle my puppy! I was mad, no I wasn't just MAD I was f'ing pissed the hell off! Then I glanced down and saw my red band and thought to myself. Nope.. you aren't defeating me. I have been through to damn much to allow this to break me to the point of leaving. I kept trudging along with the foot in pain and decided that the only way to find the team would be to cut across and that is exactly what I did. Nope, they were not on the road, ok up and over the dune lets see if they are on the beach.. Yes! There they are. So I jogged my way back to the pack and joined in for a few minutes and still foot said OH NO YOU AIN'T! So I fell back with my partner in caboosing and we made our way to the craziness that was laid out for us. As I was again wondering why in the hell I was putting myself through this to be so aggravated I glanced down and with in minutes the angels dropped gifts at my hurting feets. 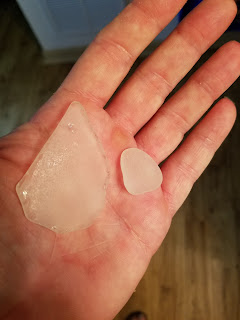 Just a little nudge from above .. if you hadn't made it to here you wouldn't have seen these! Keep going Mom! So I did, and the craziness that laid in front of us was hard, and cold, and wet, but I did it. I may have been a little behind the group but I did it and in the end I felt stronger for doing so. 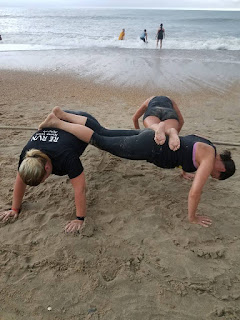 I know I am not where I was when I left here 4 years ago, but with strength and determination I can get back there! Some days are going to be hard.. today was one of those days.. but I kept on trudging and made it to the end and I still have coffee with my friends and puppy snuggles but I didn't feel like a quitter! So through it all.. the 4 years of hell I truly have never quit and will be damned if I will now.

Much Love and Sweaty Hugs
Re Run

Popular posts from this blog 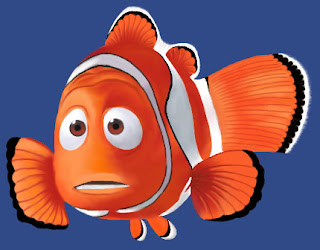 I will admit the below image is exactly what the ENTIRE team looked like right after Adam said "Ok I got it, are you ready for this... (pause)... CLOWNFISH ON THREE!" It was really quite funny as there was a pause and Adam starts counting and we all yelled CLOWNFISH? (Notice the question mark). I had this thought in my head immediately"is he making fun of us. Do I really look THAT silly running down the beach or road or maybe I look like a clown while trying to do sit ups or squats or dive into the ocean (no comments Amanda!!)" Then I realized I probably really do, but at the time I did not realize that Nemo and his dad Marlin were in fact Clownfish and after a parking lot google session with Kendall and Brooke (I think it was Brooke) it was quickly realized they were and I was ok with that. I mean seriously why not embrace my inner 6 year old and love me some Clownfish. Let's look at it this way, Nemo got a bit lost out there in the big huge Ocean righ
Read more

Photo by Automatic Timer giggle (Jay Bowman) Over the past few weeks I have had more and more people ask me what the numbers "15.23.14.9.20." are. What do they stand for? What do they mean? Photo by Courtney Hathaway   I can tell you right now what they stand for, but I would be doing you and the numbers a great injustice.   Photo by Courtney Hathaway Imagine this if you will, imagine that you are asked to describe the way the sunrise looks and feels to someone who has never seen it. Imagine telling someone the way the first rain of spring smells and feels on your cheeks to someone who has only known the desert. Imagine explaining the feeling of holding the hand of someone you love as you watch the sunset on a wonderful day to someone who has never loved.   Photo by Courtney Hathaway While you can say the words of what all those things are, and you can use descriptions of what it is, there is no way they can truly feel it and you could ne
Read more

Why you will be hearing about my Spartan for a long time. 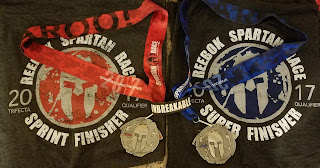 First and foremost it was the most physically and emotionally brutal thing I have ever done. My feet were not ready and by mile 6 of the Super I was done. Completely done. I knew I had completed over two thirds of the race at this point and was still at the point of not caring anymore. In the middle of the woods on some trail with stumps and roots and rocks and mud and ditches and a team waiting on me I yelled out… “@#$# this race, @#$# a Spartan, @#$@ a Trifecta, I am DONE!” Then I realized the only way to actually be done would be to get to the end. There was no rescue team, there were no flares to send up, it was me and my own strength to get me to the next obstacle. I made it there completely beaten, feeling like a failure as I had for the last 3 miles, and a team mate asked me what was wrong.. the response to my whine was a snark, which was deserved. Here I was at mile whatever it was, almost 8 by this point I think, on the last 6 obstacles of 28 and I was still a fai
Read more